It’s the transferred energy from a batters body to his bat. Then from the bat to the ball. The transfer of energy from bat to ball creates Batted Ball Speed (BBS) which propels the baseball forward. So how do we get optimal BBS? Let’s face it, BBS is what everyone cares about. BBS determines how far the ball will go once contact is made. One of the biggest questions that has been debated by fans, players, parents and coaches when discussing BBS,

“Is bat speed more important or bat weight (mass) when it comes to BBS?”

While both are important for optimal BBS – there is something that is more important- the Moment of Inertia (MOI). But we do have to briefly comment on bat speed and weight research first to understand why MOI is more important.

It has been well documented in research literature that two factors — “the weight (mass) of the bat and the speed of the swing – both can raise BBS, which adds distance to a hit. But it’s swing speed that affects BBS more dramatically.”

From Popular Mechanics “Baseball Physics: Anatomy of a Home Run”

Not all bats weigh the same. The stationary weight of a bat isn’t as important as the swing weight of a bat. Although all BBCOR (drop 3 bats) have the same length-to-weight ratio, there are actually two different ways in which the weight of the bat can be distributed – centered and end loaded. Even though two bats (one more centered loaded and one end loaded) both weigh 30oz when put on a scale, their swing weights are much different which is very important to BBS. It takes more effort to initiate movement of the 30oz end loaded bat. It also becomes much heavier once a player initiates his swing. So just looking at the weight of the bat really doesn’t tell you how “heavy” it really is when it counts – the swing.

Dr. Daniel Russell (Professor of Acoustics & Director of Distance Education at Penn State University, who has done research involving structural vibration of sports equipment) states “There is a big problem with the discussion of bat weigh. All the physics used to derive the optimum mass and the batted ball speed assume that the ball hits the bat at its center-of-mass. This very rarely happens – hits at the sweet spot are several inches from the center-of-mass. There is another very important parameter of the bat which affects how quickly you can swing a bat, and what the final ball speed (BBS) is. This parameter involves the distribution of mass along the length of the bat and how that mass distribution affects the motion of a rotating object. In physics we refer to this parameter as the moment of inertia. It turns out that the moment-of-inertia (or “swing weight”) matters more than mass.”

“This idea of the moment of inertia has to do with not only the weight of the bat – but where the weight is distributed in the bat”, states Dr. Russell. “Unfortunately,” he continues, “manufacturers don’t market MOI. Everybody knows (the manufacturers) that the MOI is what matters and that mass (the weight) really doesn’t matter nearly as much at all. When you buy tennis racquets or golf clubs you can purchase them by their MOI. Those industries understand that is what really matters”

Too light is counterproductive. Too heavy is death.

The Holy Grail – How to find Optimal BBS

The first thing players must come to terms with is that they are not professional baseball players. Pro players like contact hitter Ichiro Suzuki or power hitter Mike Trout have put in many more years perfecting their hitting mechanics, their mental approach and strength training vs. high school players and college players.

“Your goal each year should be to get stronger, get more efficient and build a more consistent and repeatable swing and increase your bat speed. It will automatically create opportunities for you to swing a longer and heavier bat.” (Rusty Trudeau, Baden Sports)

With that said it comes down to the player choosing the right bat. You can start with the suggested bat size chart (weight and length by age) – but only as a guideline. The key is the bats balance. “First find a bat that feels comfortable in your hand. Then place the barrel of the bat on two fingers and find where the bat balances on those two fingers,” states Dr. Russell. “The closer to the end of the bat – the more end loaded and it will be heavier to swing (large MOI). The closer to the center of the bat the more center balanced and will swing easier (lower MOI).”

Dr. Russell suggests, “A player needs to think about what is important to them. Am I a contact hitter or a power hitter? But remember, you will have more control of a lighter bat. If you have good mechanics and are stronger then try a heavier bat.”

So if you are considered to be a power hitter, you should look at a bat that is a couple ounces lighter (using the suggested bat size chart) but more end loaded. If you’re more of a contact hitter, then consider the suggested bat size from the chart – but it needs to be more center loaded. When in doubt, go a little lighter.

“It’s about control of the swing and putting the bat where it need to be to hit the ball. It’s about what you need to do to swing the bat as fast as you can through the strike zone with good control and mechanics“, according to Dr. Russell. “Start with a lighter bat (more center balanced) and work on weak mechanics and strength – then move to a heavier bat as mechanics become better and repeatable and the player gets stronger.”

I worked with a player who is playing baseball for his Jr. High school team. He is an 8th grader. He’s 6′ 1″ and 175lbs. He bought a bat from a “Big Box” sporting goods store. The salesman said with his size (according to the chart above) he should have a 31/34 BBCOR (which was end loaded). As an 8th grader, he just doesn’t have the strength or development to swing that heavy of a bat. It killed his mechanics and his swing speed was slow. Since he has the physique that (when he matures a bit more) should be able to swing a 31/34, just not now, we moved him to a 29/32 and kept it end loaded His mechanics greatly improved since the “weight of the bat” wasn’t negatively influencing him. Secondly, his bat speed greatly improved. He began hitting the ball like crazy and for power. Not only that, his mental approach at the plate & confidence soared. As he develops, he will move up in weight. 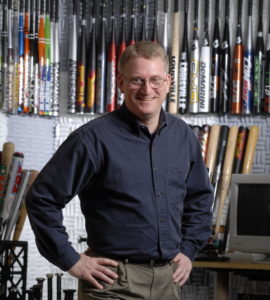 July 2011 joined the Graduate Program in Acoustics at Penn State, where he teaches graduate level courses in acoustics and vibration to both resident and distance education graduate students. In addition, oversees, manages and markets the distance education component of the acoustics instruction, including oversight of the M.Eng. in Acoustics online degree program offered through the Graduate Program in Acoustics. Also pursues research involving the visualization of acoustic phenomena (animations) for educational purposes, an experimental research involving the structural vibration of sports equipment (baseball and softball bats, hockey sticks, rackets, etc) and musical instruments.

If you want to see some of Dr. Russell’s research on this subject:

Batted Ball Speed – The Holy Grail of Hitting and Where to Find It
Simple physics description of hitting a baseball: It's the transferred energy from a batters body to his bat. Then from the bat to the ball. The transfer of energy from bat to ball creates Batted Ball Speed (BBS) which propels the baseball forward.  So how do we get optimal BBS? Let's face it, BBS is what everyone cares about. BBS determines how far the ball will go once contact is made. One of the biggest questions that has been debated by fans, players, parents and coaches when discussing BBS, "Is bat speed more important or bat weight (mass) when it&hellip;